Home REVIEWS TVs ‘Not even during martial law’: Palm Sunday marked in front of TVs,... 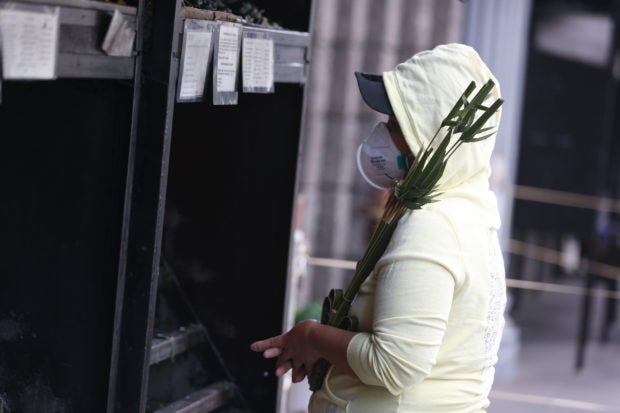 SOLITARY SUNDAY A woman prays outside the St. Peter Parish Shrine in Quezon City on the eve of Palm Sunday after the Church issued guidelines on how to celebrate the start of Holy Week at home. The guidelines, meant to avoid crowding during the monthlong lockdown, said the palms can be blessed through Masses streamed online. —NIÑO JESUS ORBETA

MANILA, Philippines — The Philippines’ more than 90 million Roman Catholics will observe Palm Sunday, one of the most important and colorful commemorations in the liturgical calendar, in front of TV sets or personal computers with palm fronds in hand as a precaution against the spread of the new coronavirus disease (COVID-19).

In the past, Catholics celebrated Palm Sundays (or “Domingo de Ramos”) by reenacting Jesus’ arrival in Jerusalem, waving palm fronds that are blessed with holy water by priests before or after the Mass.

But for this year, the Catholic Bishops’ Conference of the Philippines (CBCP) has discouraged such gatherings to avert the spread of the deadly coronavirus.

Not in past 50 years

“I don’t remember that this has happened in the past 50 years,” said Monsignor Manuel Gabriel, executive secretary of the CBCP Basic Ecclesial Communities Committee.

“Not even during martial law. The only thing we dreaded then was the military loitering around church [premises] on the lookout for fiery sermons of priests who [were considered possible] sources of dissent,” he added.

Gabriel, 76, celebrated his 50th sacerdotal anniversary on March 27. He was a young priest when the dictator Ferdinand Marcos declared martial law in 1972.

The author of several books, including “John Paul II’s Missiology in Asia (1992),” Gabriel recalled that during martial law, churches were considered hot spots because they were areas where the people converged.

“Probably because there might be people who could take advantage of the crowds then … During [World War II], the same [closures] must have happened but those were extraordinary circumstances,” he said.

Churches in four dioceses in Metro Manila initially suspended Masses on March 15 to March 21 as a precaution against contagion.

On March 16, however, President Duterte placed the entire Luzon under enhanced community quarantine as reports of COVID-19-infected persons rose. Priests were told to celebrate Masses in private.

The Catholic calendar considers Holy Week, which begins on Palm Sunday, as one of the most significant celebrations of the faith.

Palm Sunday recalls Jesus’ triumphant entry into Jerusalem where he was greeted by crowds waving olive branches before his betrayal in a political conspiracy that led to his crucifixion on Good Friday and resurrection on Easter Sunday.

Parishes have posted schedules of online livestreaming on social media so the faithful can still hear Mass in the safety of their homes.

Rory of BF Homes Parañaque said she would wait in front of her TV set for the Mass to be aired, holding a palm frond.

“I have two palm trees so I’m sharing palm fronds with the neighbors,” she said in a text message. “We [have been reciting] community prayers — the ‘Oratio Imperata’ on COVID-19, the Holy Rosary and the Chaplet of the Divine Mercy — with lighted candles by our windows since March 29 because a resident tested COVID-positive. The person is recovering now, we heard.”

Myra of Nuvali Homes in Laguna said she would pick fresh fronds early Sunday morning before heading back home to hear the Mass on TV. She said she used to hear Mass at St. Benedict Parish in Silang, Cavite, before churches were closed because of COVID-19.

Geraldine of Fairview, Quezon City, used to hear Mass with her family at the Shrine of St. Paul the Apostle in their village. Today she will hear Mass online “with the whole family,” she said via text message.

April of Tahanan Village, Parañaque, said not just palm fronds but also “any leaf” that would be placed “on a table at home” to celebrate Palm Sunday would be blessed during the live-streamed or televised Masses.

How has it come to this?

Tino of Jaro, Iloilo, said he would miss the “usual jubilatory mood” of Palm Sunday celebrations. “I may have to watch it on TV … How has it come to this, God help us,” he said on Viber.

Fr. Armand Tangi of the Society of St. Paul in Makati City said that in the past, civilians living in San Antonio Village outside the seminary were welcome to attend the religious order’s Palm Sunday Masses.

But this time, he said, “only our priests and seminarians [can attend],” although this year’s celebration would still include the blessing of the palms outside the church, followed by a procession entering the church and “long readings.”

Fr. Jude Rebaldo, parish priest of St. Joseph Spouse of the Blessed Virgin Mary Parish in Banga, Aklan, said he would celebrate the Palm Sunday Mass this year “without parishioners.”

Despite the convenience of televised and live-streamed Masses, Monsignor Gabriel said parishioners were still conveying their discomfort at not being able to attend celebrations in church, especially this Holy Week.

“Right now, under these circumstances, you are completely on your own. People talk to me about spiritual hunger and thirst,” Gabriel said.

Each year, Urbano Razon Jr. and his wife join millions of Filipino Catholics in having their palm fronds blessed during Palm Sunday.

“Every year, without fail, we see to it that we have palm leaves, we have them blessed, and we place them either in the garage or on the porch. We let them dry and preserve them for Ash Wednesday the following year,” Razon told the Inquirer.

Today, Razon, a lay minister at the San Ildefonso Parish in Makati City, and his wife will perform their yearly ritual in front of a TV set.

“Just like the previous Sundays during the lockdown, we will have an altar with a lighted candle during the Mass and we will participate as if we’re inside a church,” he said.

No need for holy water

To complete the commemoration of Jesus’ triumphant entry into Jerusalem, Razon said his wife had prepared a stem of a plant in place of the young coconut leaves woven into decorative shapes that are usually sold outside churches during Palm Sunday.

According to Manila Auxiliary Bishop Broderick Pabillo, the faithful may place their palm fronds or any branch with leaves near the TV set or laptop during the Mass, and these will be blessed by the priest with the Prayer of Blessing and the Scriptural Reading during the celebration.

“In their homes there is no need for holy water for the blessing of their palm branches,” added Pabillo, the apostolic administrator of the Archdiocese of Manila.

The CBCP had earlier recommended that priests go around the streets to bless the palm fronds of Catholics waiting in front of their homes without using holy water, which “might cause commotion.”

But the bishops issued a new circular, which also contained additional Vatican guidelines, saying that such activities “should be considered with great caution, having in mind not to give an opportunity for our faithful to congregate outside their homes.”

“In such a scenario, it will be very difficult to implement the ‘social distancing’ measure,” read the circular signed by CBCP president and Davao Archbishop Romulo Valles. “Moreover, such a scenario will be in contradiction to the lockdown and ‘stay at home’ measures now enforced in many places.”

But with or without palm fronds, making the celebration meaningful hinges on the people’s disposition to receive spiritual blessings and their attendance at such rituals even if virtual in nature, said Fr. Jerome Secillano, the CBCP public affairs committee executive secretary.

Remission from all sins

“The Church has already given the people, through the Pope, the indulgence, absolution and remission from all our sins; hence, it’s up to us to make ourselves worthy of these graces,” Secillano said.

He said that even in ordinary or normal circumstances, a palm frond may not even be needed.

“It is merely to dramatize the first Palm Sunday and a reminder of the joy of welcoming Jesus in your homes,” Secillano said. “What is important is your internal disposition to journey with Christ as he enters Jerusalem. We must be prepared to meet our own Passion. We should open ourselves, let Him enter our lives and let His will be done.”

Pabillo also said that “even without palm branches in our hands, we can still welcome the Lord and ask him to enter our homes and our lives by our prayers and fidelity to his commands.”

He urged the faithful to read and reflect over the Passion Narratives: “From the narration of his suffering let us meditate on such a tremendous love that is ready to take our punishment.”


For more news about the novel coronavirus click here.

What you need to know about Coronavirus.

Don’t miss out on the latest news and information.

Broadcast TV’s super superhero saga, ‘Marvel’s Agents of S.H.I.E.L.D.,’ goes out on its own terms

Amid the COVID-19 crisis and the looming economic recession, the Smart TVs market worldwide will grow by a projected US$147.7 Billion, during the analysis...

Has the US SEC Closed the Global Window on New Tokens?