Products featured are independently selected by our editorial team and we may earn a commission from purchases made from our links; the retailer may also receive certain auditable data for accounting purposes.

Smartphone cameras have become way more powerful over the past few years thanks to significant advances in software, DSP (digital signal processors), and the miniaturization of lenses and other optical hardware.

There’s a good chance the phone you’ve got can record video in 4K (Ultra HD), and definitely 1080P (Full HD), but if you want to use it for more than taking casual home movies, you’ll want a smartphone camera rig. A camera rig is a handheld device that looks like a cage, and serves two important functions.

First, it allows you to get more stable (less shaky) footage by holding onto the grips on the right and left sides of the rig. Using two hands instead of one substantially reduces the shakiness of your video compared to holding your phone one-handed. The body of the video rigs we recommend also have a little screw hold that allows you to attach them to a tripod, a great option for vloggers or other single-person video makers.

The second reason to use a smartphone camera rig is that it’s designed to work with important accessories like miniature LED lights and microphones, which can improve the look and sound of your recordings. Smartphone camera rigs have notches or standard-sized screw holes (similar to the ones you use to attach them to a tripod) where these accessories can be attached.

By greatly reducing the jitteriness of your recordings, and improving the video and audio quality, a smartphone camera rig can make a real difference in your results. We’ve collected some great options if you’re interested in taking your smartphone video more seriously whether you’re a weekend hobbyist, aspiring YouTube or TikToker, or the dedicated family movie taker.

What You Need to Know Before Buying a Smartphone Video Rig

There are many factors to think about when choosing the right smartphone video rig for you; below are the most important ones, which we considered while we were researching this list.

Weight: Using a smartphone camera rig requires holding it for extended periods of time (unless you set them on a tripod), which can get fatiguing. All of the ones we recommend weigh between one pound and 1.5 pounds, which shouldn’t feel too heavy since you’re holding the rig with both of your hands.

Phone Compatibility: Every smartphone rig we’ve chosen for this guide can work with a wide variety of phones. None are iPhone or Android phone specific, so you can continue to use your rig of choice if you upgrade your phone.

Add-Ons: As we mentioned earlier, a big strength of using a smartphone camera rig is the ability to connect key accessories. Some manufacturers bundle accessories with their rigs, so you can have an even better experience out of the box.

FocusFoto definitely had more inexperienced video enthusiasts in mind when putting together its smartphone camera rig.

At 1.32 pounds, the rig is one of the two heaviest choices in our guide, but it shouldn’t be too difficult to hold for shorter bursts of time. The mount in the middle of the rig can hold phones with screens between four and seven inches, which is basically all of them.

What makes this smartphone camera rig stand out is the fact that it’s part of a bundle, which includes a microphone and LED light. Both slot into “shoe” mounts, which are a standard slot used by several camera accessory makers. The LED light has a maximum output of 5.5w (watts), a maximum brightness of 800lm (lumens), and color temperature of 6,000k (kelvin).

The LED light’s maximum brightness will add a fair amount of extra light to your shots, but shouldn’t be the only one you rely on during night-time shoots. Its color temperature will cast a “warm” (amber) light, so make sure the subject or scenery you’re shooting will benefit from the slight tint.

FotoFocus chose to bundle a thin, directional microphone with its camera rig, which is great news for bloggers. This style of microphone will pick up sound from exactly where it’s pointed (likely your face), and won’t pick up ambient noise that you’d have to edit out later. The microphone also comes with a furry wind shield to insulate it from picking up additional noise.

The one downside to this microphone is that it terminates into a 3.5mm connector. Most smartphones don’t come with a headphone jack, so you’ll need to use an adapter with your phone to connect it. Still, having the microphone at all is a great addition.

If you’re just getting started, this rig is a great bundle with accessories you’ll actually want to use.

Pros: This smartphone camera rig comes with an LED light and microphone to help improve the video and audio quality of your recordings out of the box.

Cons: A little heavy, you’ll likely need an adapter to use the microphone. 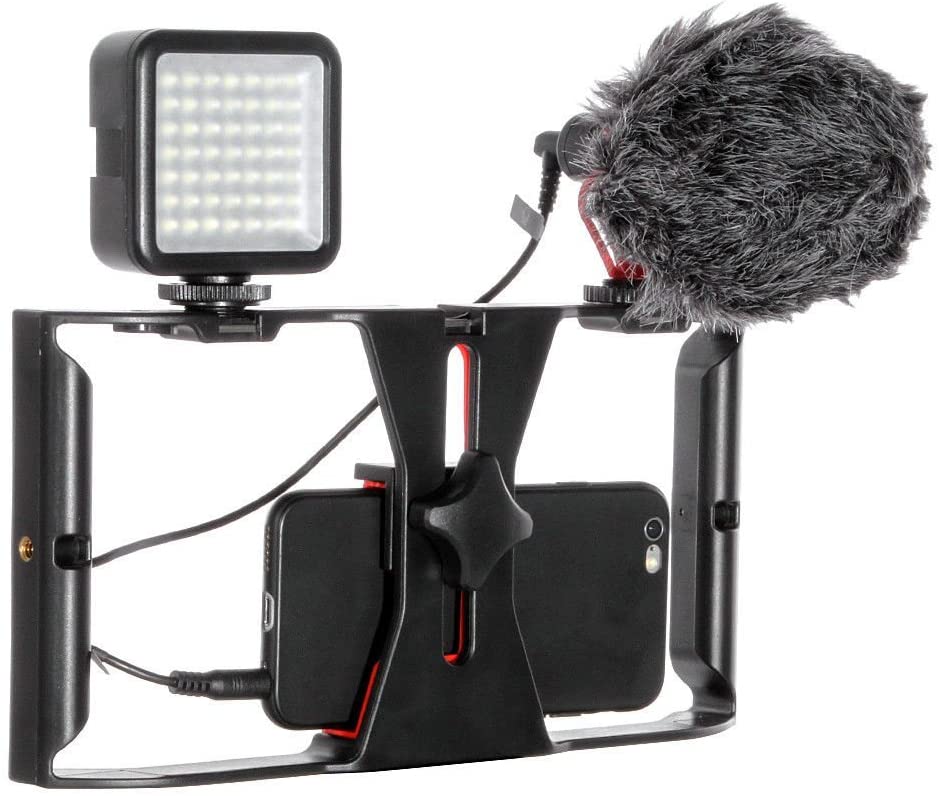 YELANGU took a slightly different approach when designing its smartphone camera rig, which can be used with and without its cage.

At 1.2 pounds, this is the lightest smartphone camera rig in our guide, and you may feel the difference if you plan on using it for longer shots. It has finger ridges on both sides, and a curved back, which make it easier and more comfortable to grip.

This smartphone camera rig will work with phones with screens between four and seven inches, which covers nearly all phone models at this point. YELANGU doesn’t include any accessories with its smartphone camera rig, but you can attach two of them to the standard-sized shoe mounts on the top of the rig.

Although it looks like a standard camera rig, you can unscrew the frame into five individual pieces. Once it’s deconstructed, you can attach the smartphone mount to one of the rig’s handles to create a handheld gimbal. Gimbals are used by professional camera operators to reduce shakiness when recording.

Using the camera rig in gimbal mode will provide more stability than holding it in one hand, but less stability than using the fully attached rig. It’s a compromise, but it’s very nice that YELANGU gives you the option to use either mode depending on the situation.

If you want a modular smartphone camera rig, and want to pick your own accessories, you should strongly consider this one.

Pros: A lighter frame and dedicated finger grips make this camera rig easier to hold. The rig can be deconstructed and used as a gimbal.

Cons: It doesn’t come with any accessories. 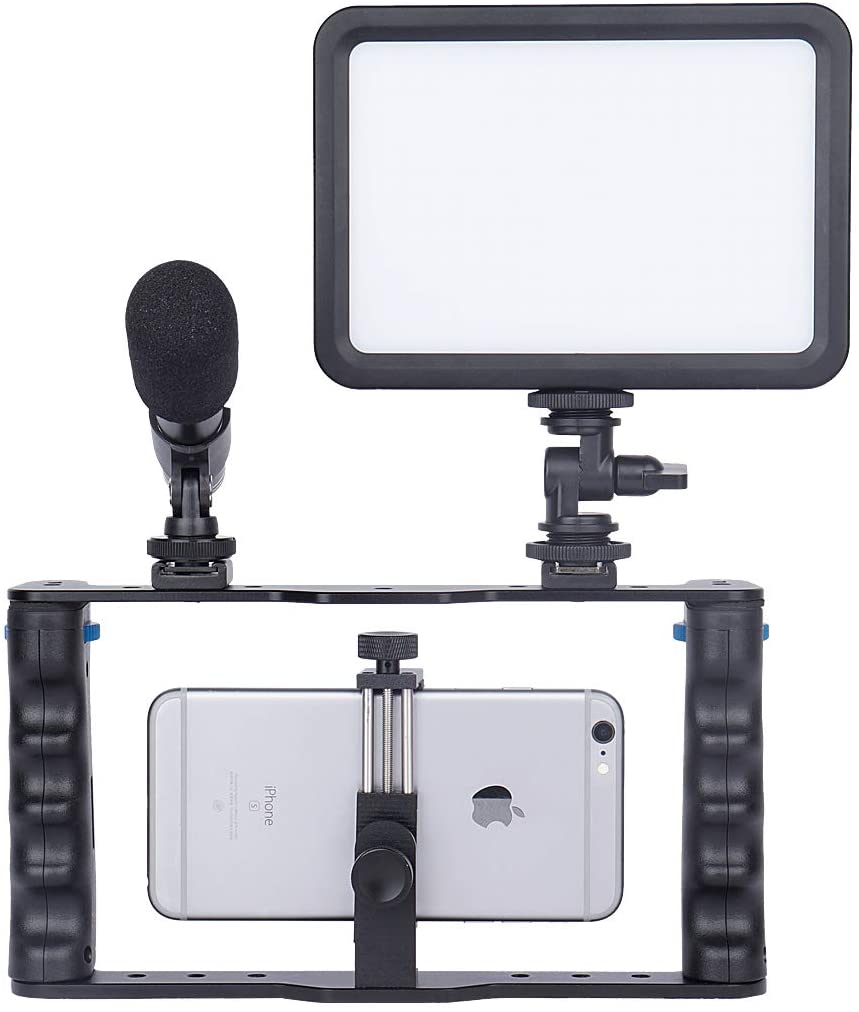 If you’ve decided to go all-in on using your smartphone as a professional camera, DREAMGRIP’s Evolution Pro will help you seriously up your game.

The rig weighs 1.32 pounds, which is tied for the heaviest option in our guide. Each handle does have finger grips, though, which will make it a little easier to hold. DREAMGRIP doesn’t give exact specifications for smartphone compatibility, but if your phone was made in the past five years, it should fit.

The Evolution Pro doesn’t come with any accessories, but it’s prepared to handle several of them. The top of the rig has three, standard-sized accessory mounts, and two shoes. As seen in the picture below, you can attach two cameras, a microphone, and two light sources to the rig simultaneously.

The smartphone camera rig’s phone mount is also modular. It sits on a track, so you can position your phone to the right spot to frame the perfect shot. An additional mount allows you to use an external lens (zoom, wide angle, macro) to record videos your phone can’t get out of the box. The lens mount works with any third-party lens that uses a 17-37mm thread, which is an industry standard.

DREAMGRIP doesn’t include any of these accessories in the box, but it gives you the option to build your ideal smartphone camera setup over time (or all at once, we won’t judge). If you’re jumping into smartphone videography with both feet, this is the camera rig you should get.

Pros: Its five mounts allow you to build an elaborate video setup with the accessories of your choice.

Cons: It doesn’t come with any accessories, and the manufacturer doesn’t give concrete information about smartphone compatibility. 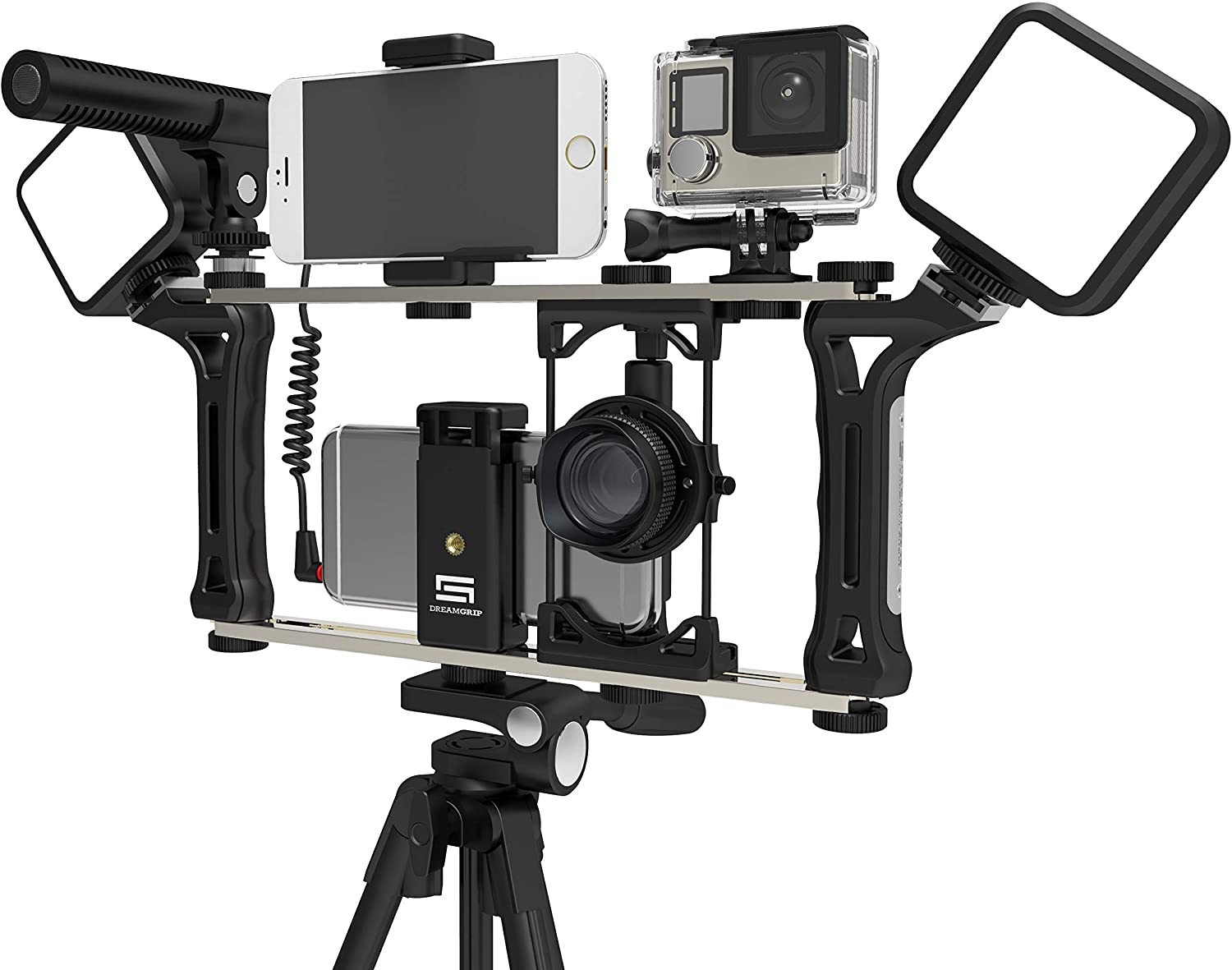 Intoxicated man jailed after battle with estranged girlfriend over her phone

Xiaomi phone cameras could borrow a feature from the Google Pixels