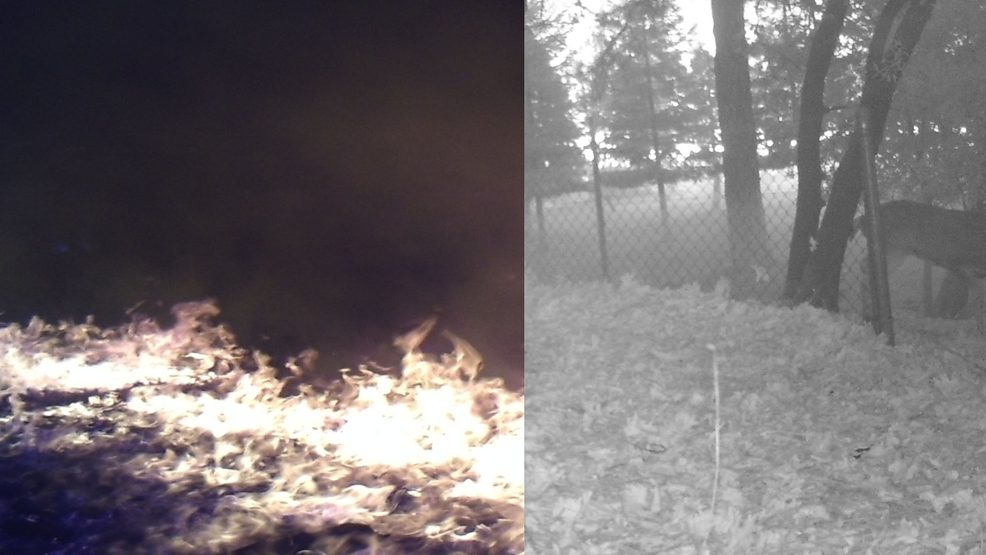 The Camp Fire burned 18,000 structures and destroyed almost everything in its path in early November. But amazingly, a trail camera in Paradise survived and recorded some dramatic images as the fire tore through.

Phill and Elise Simpson lived on Porter Court on Paradise’s west side and had a Moultrie game camera in their backyard pointing toward Bille Park. The home was destroyed, but Phill Simpson was able to recover the trail camera and data card and was surprised at what he found. The photos provided a minute-by-minute timeline for what happened in his corner of Paradise, including the moment his home was destroyed.

A series of dramatic photos showed the fire’s advance on November 8, capturing animals scurrying away from the flames and recording the spiking temperatures as the fire moved over the property. Simpson posted some of the photos on Facebook and added captions describing what the cameras captured.

At 5:57 a.m. on November 8, 36 minutes before the fire started near Pulga, the trail camera showed a family of raccoons playing. The camera was located on Porter Court, off Oliver Road on the west side of town. Phill Simpson was out of the country in Egypt, and his wife Elise was at home in Paradise. Little did they know what was about to happen.

At 6:33 a.m., the Camp Fire was reported just over 10 miles to the northeast at Pulga Road and Camp Creek Road.

At 8:49 a.m. the sun was up but the camera didn’t see enough light to switch to daytime mode. Simpson added the caption “the smoke cloud has turned day into night in Paradise. The fox is smelling the smoke and knows something is wrong.”.

3:49 p.m: “A doe confused by the smoke runs for safety,” described Simpson.

4:41 p.m.: “The deer run for their lives as the fire burns through the homes on the east side of Bille Park. “

5:12 p.m: “The source of the embers becomes apparent. the bright light coming from the left is my home burning.”

5:13 p.m.: “The fire, driven by the winds, sweeps through the leaves. the temperature rises to 70 degrees.”

5:27 p.m.: “The fire sweeps into the leaves and trees in Bille Park. The temperature of the game camera, which is only two feet above the forest floor, hits 162 degrees and partially melts the camera case around the lens.”

8:27 a.m.: “The day after the fire, a lone doe wanders through the area, confused by the utter destruction.”

2:01 p.m.: “November 10, two days after the fire – the batteries have run low and the camera only sporadically takes photos. the fire has run it’s course through Paradise leaving burned homes and trees along with charred ground.”

“November 28 – the batteries have mustered enough charge to allow the camera to take one last picture. Life goes on: The Fall leaves continue to fall, bucks continue to wander their territory, and the survivors of the Camp Fire will persevere, wherever the next chapter of their lives may take them.”

The house the Simpsons considered their forever home is now gone, and they have relocated to be closer to their grandchildren..

The Simpsons left a lasting impact on the Paradise community. Their home on Porter Court has been featured on KRCR News Channel 7 in previous years for their elaborate Christmas displays set to music. As part of the display they collected food for the needy.

Our Field Cameras Melted in the Bushfires And When We Opened Them, the Results Were Startling

Why The Government Should Regulate And Not Ban Cryptocurrency – Technology

Huawei is preparing a tablet with support for fast charging with...