The new Missouri House education committee chairman is focused on educational choice, and says the committee’s aim is to ensure that every young person in Missouri has access to a quality education. 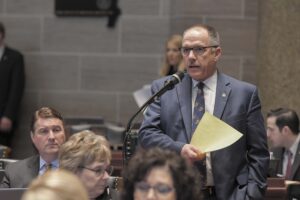 Chairman Basye tells Missourinet that parents should have as many options as possible for what they believe is best for their children.

“And whether that be the public school or a private school or a religious school or even a home school environment, I think the parents should have that opportunity to choose what might be best for their children,” Basye says.

While he supports educational reform and education choice options, Basye emphasizes that he will not attack public education. He attended St. Charles High School in eastern Missouri.

“I’m a product of public ed, my wife works for the Columbia public school (CPS) system, my grand kids are all public school children,” says Basye.

They are state funded and operate independently of traditional public schools.

Click here to listen to the full interview between Missourinet’s Brian Hauswirth and newly-appointed Missouri House Elementary and Secondary Education Committee Chairman Chuck Basye, R-Rocheport, which was recorded on December 2, 2019 at the Statehouse in Jefferson City:

Most crypto exchanges are vulnerable by design, says ByBit CEO

The Stock Market Dropped Last Week. Why It’s Not Time to...

Manila to buy 27,000 more computer tablets for students enrolled in...