Welcome to Foreign Policy’s weekly South Asia Brief. The highlights this week: What’s causing India’s economic slowdown, mass protests spread across India over the rape and murder of a woman in Hyderabad, and a new chapter begins in the smartphone wars.

If you would like to receive South Asia Brief in your inbox every Tuesday, please sign up here.

India’s Economy Is Slowing Down

Data released last week shows that India’s economy expanded by just 4.5 percent between July and September, its sixth consecutive quarter of slowing growth. The new figures represent a stunning decline: The country’s GDP was growing by more than 9 percent at the start of 2016, and by 8.1 percent as recently as early 2018.

While national growth statistics rarely mean much to individual citizens, other indicators point to a struggling economy. The unemployment rate stood at around 7.5 percent in November, with a record-low 42 percent labor participation rate. As a result, consumer demand has weakened, leading to a perpetual cycle of slowing manufacturing, production, investment, and job creation.

Climate of fear? Critics say that it is not just risk aversion but fear that is causing low levels of investment and lending, contributing to the slowing growth. In an opinion essay in the Hindu last month, the economist and former Prime Minister Manmohan Singh describes a “palpable climate of fear” across the country.

He writes: “Many industrialists tell me that they live in fear of harassment by government authorities. Bankers are reluctant to make new loans for fear of retribution. Technology start-ups … seem to live under a shadow of constant surveillance and deep suspicion. Policymakers in government and other institutions are scared to speak the truth or engage in intellectually honest policy discussions. There is profound fear and distrust among people who act as agents of economic growth.”

Industrialists speak up. This sentiment was echoed over the weekend at an Economic Times event by the billionaire Rahul Bajaj, the chairman of the Bajaj Group. “We are afraid … but no one will talk about it,” he said. The comments—rare among the typically pliant industrialist class—were met with applause. Minister of Home Affairs Amit Shah offered an equally rare response to Bajaj at the same event: “As you are saying, an atmosphere has been created, we too will have to make an effort to improve it. But I want to say that no one needs to be afraid.” The government’s damage control continued Monday, as Finance Minister Nirmala Sitharaman addressed Parliament: “To say that this government does not listen to criticism is unfair … ours is a government that hears and responds,” she said.

What can New Delhi do? The government has already exhausted several options to improve the economy. In September, India cut its corporate tax rate from 30 percent to 22 percent in a bid to boost investment. New Delhi then announced the merger of 10 state-owned banks to shore up the ailing sector’s balance sheets. And in November, the government revealed that it planned to raise $15 billion by selling public stakes in oil, shipping, and logistics companies.

India could take strong action by lowering interest rates, but even that option is limited: The Reserve Bank of India has already slashed rates by 135 basis points this year—the most by any Asian bank, Bloomberg reports. The central bank will announce its latest rate decision on Thursday. As shown below, India has consistently cut interest rates over two years without stopping the slowdown. Most economists say India needs to grow at nearly 10 percent a year for job creation to keep pace with the 12 million people who enter the workforce every year.

Meanwhile, government officials continue to tout Prime Minister Narendra Modi’s goal to grow the country’s $2.9 trillion economy to $5 trillion by 2024—a transformation that would be impossible at current growth rates. Perhaps New Delhi can begin to address reforms by first acknowledging the scale of the country’s economic malaise. 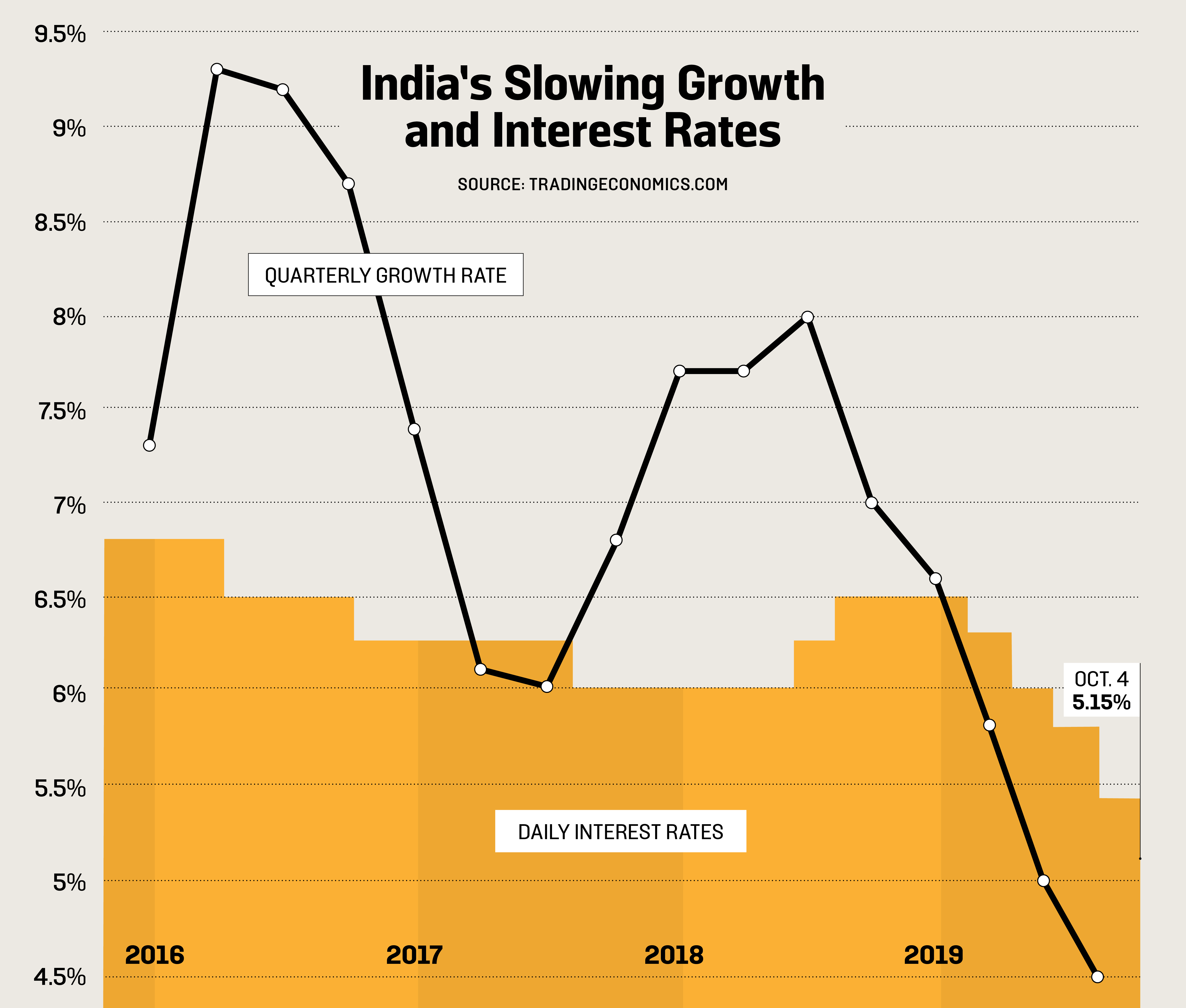 India is fed up with sexual violence. India is ranked the world’s most dangerous country to be a woman, according to a 2018 survey by the Thomson Reuters Foundation. That statistic hit home last week when the body of a 27-year-old woman who had been gang raped and strangled to death was found in Hyderabad. Four men have been arrested in connection with the crime. The murder has set off major protests in cities across India, recalling the 2012 marches against another brutal rape that led lawmakers to double prison sentences for rapists and criminalize stalking and trafficking women. Those changes have not stopped rising violence, particularly against women.

Sri Lanka’s lending windfall. Gotabaya Rajapaksa has been president of Sri Lanka for little over two weeks, but he’s already facing some big foreign-policy decisions. On Friday, Modi announced that India would lend Sri Lanka, which is caught in a battle for influence between China and India, $400 million for infrastructure development. The move came after Rajapaksa said that Asian countries would be forced to seek more investment from China if it was not forthcoming from elsewhere. The warning must have stung: From 2005 to 2015, under the leadership of Rajapaksa’s brother Mahinda, Sri Lanka did grow closer to China. But on his trip to India over the weekend, the new president wrote those ties off as “purely commercial.”

Trump’s surprise visit. Last week, U.S. President Donald Trump made his first visit to Afghanistan since he took office. During his drop-in on the U.S. troops still stationed there, he said that “the Taliban wants to make a deal and we are meeting with them,” adding, “[I]t has to be a cease-fire … and now they want a cease-fire.” Trump’s statement took everyone—even the Taliban—by surprise, because he called off talks with the militant organization in September just as the two sides were about to sign a draft agreement for U.S. withdrawal. His remarks about a cease-fire, in particular, set off alarm bells: The United States has never demanded one from the Taliban—and it has little power to enforce one anyway.

Pakistan’s students march. Police in Lahore charged hundreds of students with sedition after they took part in marches against a ban on student unions and political activity on university campuses. The demonstrations were replicated across the country. Amnesty International has called the crackdown a “brazen violation” of the students’ “rights to freedom of expression, association, and peaceful assembly.” 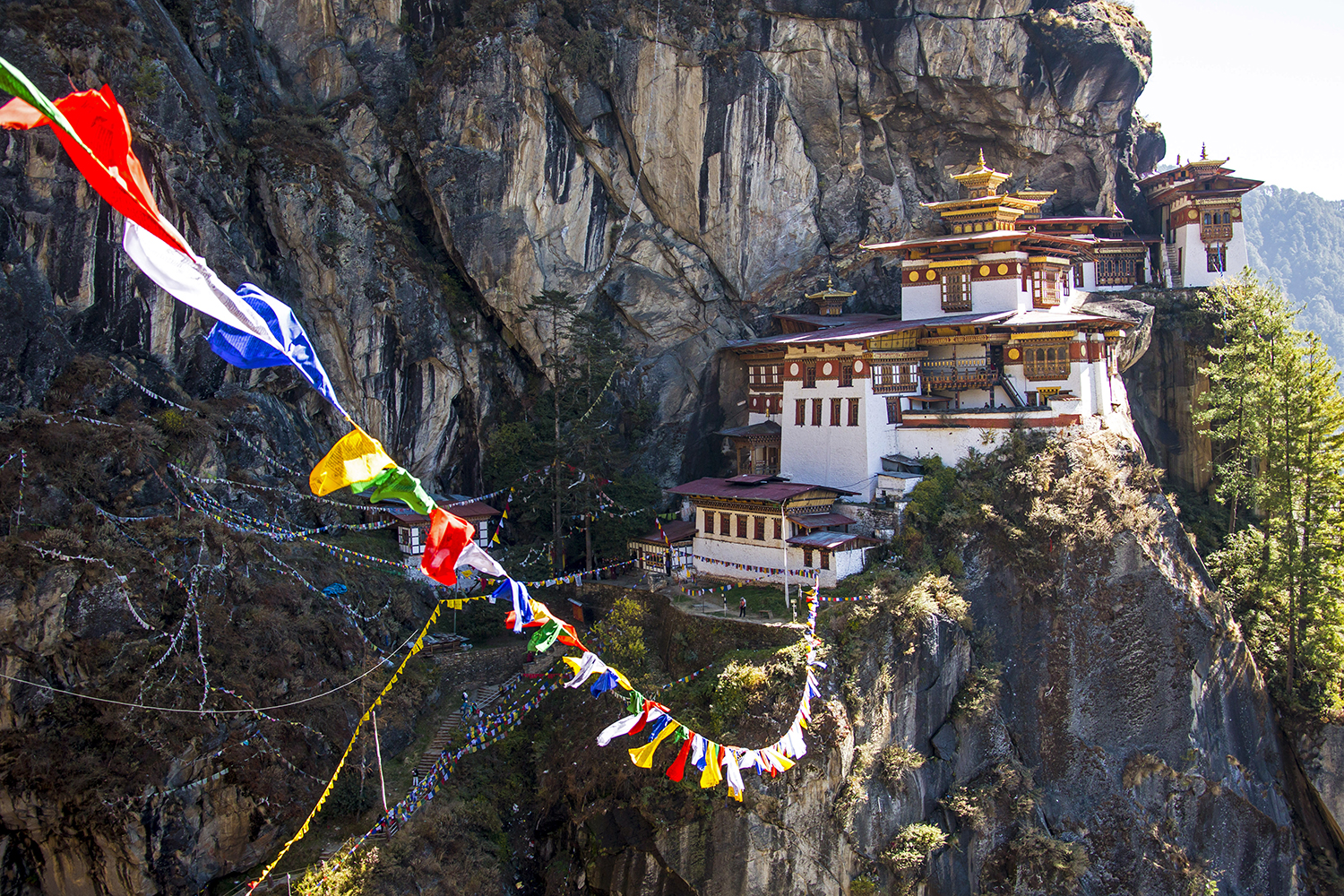 Lonely Planet recently released its Best in Travel 2020 list and ranked the Himalayan kingdom of Bhutan as the No. 1 country to visit, citing its unsullied mountain trails and the fact that it is the world’s only carbon-negative country. It was the only South Asian country in the top 10, but one South Asian city made the list of global cities to visit next year. Which one is it?

Scroll down for the answer.

Chinese tech. Ever heard of Club Factory? The Chinese e-commerce company’s app was the most-downloaded app in India in October, the Financial Times reports. China’s slowdown has led its tech entrepreneurs to emerging markets, and India presents an ideal alternative given its burgeoning base of smartphone users. Club Factory is now one of India’s fastest-growing fashion and lifestyle marketplaces as it undercuts local rivals.

Smartphone wars. For years, India’s top cellular providers have slashed rates for calls and data in a bid to grow their shares of the market. As a result, Indians have been paying among the cheapest global rates for cellular data. Now, that could change. Over the weekend, two of the biggest providers, Bharti Airtel and Vodafone Idea, announced plans to raise their rates by 40 percent. The third major player, Reliance Jio, is expected to follow suit.

Graphic detail. Sri Lanka’s new president, Gotabaya Rajapaksa, made his name as a fearful secretary of defense who presided over the end of the country’s decadeslong civil war—and, allegedly, many serious human rights violations. In a new graphic novel, Vanni, the author Benjamin Dix, a former United Nations worker in Sri Lanka, and the illustrator Lindsay Pollock grapple with the complicated politics of this period through the eyes of a fisherman, Antoni Ramachandran, and his family.

The book, according to one review, shares “the characters’ continuing experience of trauma long after the inciting incident has ended. By revealing the way they cope, the way they live in the aftermath, the book makes you feel the lingering impact of the war and not just the immediacy of violence.”

That’s it for this week.

We welcome your feedback at newsletters@foreignpolicy.com. You can find older editions of South Asia Brief here. For more from FP, subscribe here or sign up for our other newsletters.

The Commodities Feed: Big inventory draws from the API | Snap

How Blockchain Will Bridge Consumption To Consciousness In The Jewelry Industry