Home FINANCIAL Donald Trump vows to ban TikTok from the US

Donald Trump has vowed to ban TikTok, the Chinese-owned video-sharing app, from operating in the US as his administration finalised a national security review of the company.

The move, announced by Mr Trump as he flew back to Washington from Florida on Friday night, is likely to further inflame geopolitical tensions with China. It also could quash, or at least complicate, efforts by several potential US buyers of TikTok, including Microsoft, to purchase the company.

“As far as TikTok is concerned we’re banning them from the United States,” Mr Trump told reporters on Air Force One, adding that he could use his executive powers to formalise the decision as early as Saturday.

Mr Trump’s comments came after it emerged that Microsoft, the US technology company, was in talks to purchase TikTok, which is owned by China’s ByteDance, according to people familiar with the matter. A group of US investors in ByteDance, including Sequoia Capital and General Atlantic, has also discussed a deal to buy TikTok, the Financial Times reported last week, so that its US operations could be separated from the Chinese parent company.

But Mr Trump poured cold water on a possible sale of TikTok to a US company on Friday night, saying he did not favour such an option. “Not the deal that you have been hearing about, that they are going to buy and sell . . . and Microsoft and another one. We are not an M&A [mergers and acquisitions] country,” he said, according to Reuters news agency.

TikTok did not address Mr Trump’s comments specifically, but released a statement after Friday’s media reports highlighting its plans to increase its US workforce of 1,000 by tenfold and a $1bn fund to help US creators.

“TikTok US user data is stored in the US, with strict controls on employee access. TikTok’s biggest investors come from the US. We are committed to protecting our users’ privacy and safety as we continue working to bring joy to families and meaningful careers to those who create on our platform,” the company said.

The US government’s Committee on Foreign Investment in the US, or Cfius, which is led by the Treasury department, had been reviewing TikTok’s status in recent weeks on national security grounds, amid concerns that China could gain access to sensitive data through the app. As well as considering an outright ban, and a spin-off to a US buyer, the Trump administration has also weighed whether to place TikTok on the so-called entity list run by the commerce department, to sharply restrict its ability to do business in the US. 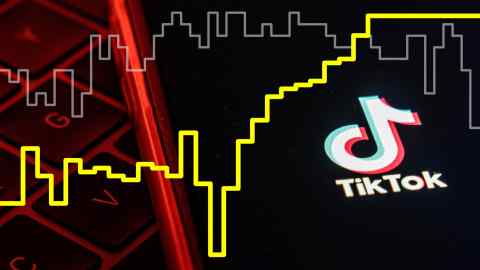 A ban on TikTok in the US could trigger further friction between Washington and Beijing at a time when they are already at such a low point that many observers are describing their relations in terms of a new “cold war”.

The battle for dominance in technology has been one of the biggest strategic and economic sources of rivalry. In 2019 the Trump administration placed Huawei, the Chinese telecommunications equipment maker, on the “entity list”, dubbing it a threat to national security, and followed up by putting pressure on its allies around the world to reject its use in their own 5G mobile networks.

A ban on TikTok’s operations in the US may help buoy Mr Trump with some voters within his political base and beyond who have pointed anti-China feelings, but it also risks triggering a backlash among users of the app in America, especially younger voters.