If you support the crytpocurrency Bitcoin SV, there is a land far beyond the blood-soaked trenches of Twitter where you can come to no harm. Where enthusiasts of the Bitcoin fork graze unmolested in fields of plenty; where money flows like spring water from a deep geyser, sparkling and true; where men and women join hands in celebration of a singular investment thesis. The name given to this land, nay, this paradise, is “Twetch.”

Twetch is a Twitter clone built on the BSV blockchain, founded by developer Randy Moish. Moish originally tried to build a similar platform on Ethereum, among other competitive protocols, but preferred Bitcoin SV. That’s the Bitcoin fork helmed by Craig Wright, the widely maligned Australian computer scientist who claims to be the inventor of Bitcoin.

He would not say how many people are in its community; the number of users is likely miniscule. Still, there is something to it.

Tweets are preserved immutably, they can only be viewed by approved members (there’s a waiting list—get in line!) and you must pay, in BSV, to like, share or comment on another’s post. The app comes with some Twetchy jargon: tweeting is “twetching,” retweeting is “branching,” and, well, that’s pretty much it. (“Twetch” itself is a portmanteau of “Tweet” and “Etch”).

Twetch is a home for an exiled people

BSV is the dark horse of the cryptocurrency world, which is saying something. A contentious Bitcoin fork that purports to align with “Satoshi’s Vision” (hence the name), BSV has been ostracized from the mainstream Bitcoin “community” ever since its birth-by-hard-fork in late 2018 (it’s actually a fork of a fork, splitting off from first generation Bitcoin fork Bitcoin Cash, rather acrimoniously). Last year, its outcast status was further cemented after a cabal of major exchanges delisted the token from their platforms, in response to Wright’s perceived libel trolling.

And BSV supporters recently got into a bizarre argument with the Wikipedia founder Jimmy Wales. After Wales agreed to attend a BSV conference, supporters hailed it as approval of the network, to which Wales clarified on Twitter, “I’m coming to speak my mind, which includes that BSV offers nothing for Wikipedia and that there is zero chance we would ever use it.”

Twetch has become a sort of port-in-a-storm for BSV-ers,  and their culture is endemic on the platform: “giveaways” of the BSV coins (whose value recently skyrocketed) proliferate; BSV citizen journalists, embedded in US district courts, report live updates from Wright’s various ongoing legal proceedings; users spell Bitcoin, “BitCoin,” a winking reference to Satoshi’s early writings, as a “signal” to those who believe in BSV’s supposed return to the roots of the protocol; others post screeds on how BSV “won the protocol war,” despite its minimal usage, in BSV’s foremost billionaire-funded propaganda vehicle, CoinGeek.

“It’s very much a BSV echo chamber at the moment,” said “Mike in Space,” a popular and pseudonymous cryptocurrency pundit, sketch writer and Twetch fan, whose cryptocurrency allegiances fall across the aisles. “For it to succeed it will have to become far more broad in its appeal. That’s very tough as most people in crypto outside BSV will not even touch it. You’re treated like a pariah if you do. I think for it to grow it will need to attract non-crypto communities.” 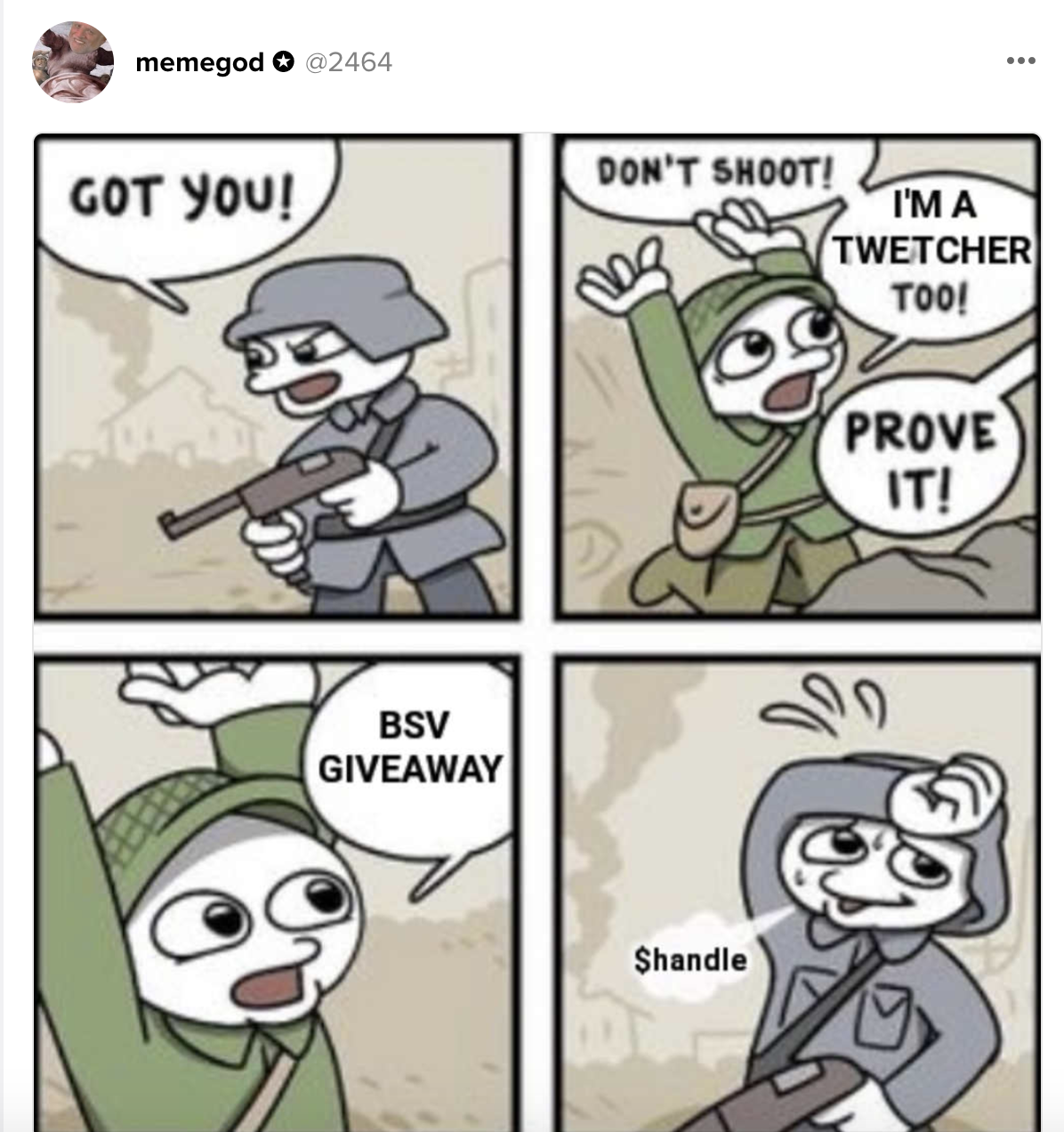 Despite the long-running, is-he-is or is-he-ain’t Satoshi circus, many in the community apparently love Wright. Nevertheless, Moish insists that his use of the BSV chain is motivated purely by technicals: it’s simply the most effective protocol for him.

“We never really cared if CSW was Satoshi, but he often pointed to things Satoshi said and explained them in a way that made sense to early bitcoiners,” said Moish. “He certainly understands how to scale a blockchain in a way no other individual has succeeded.”

And Wright’s vitriolic public persona?  “No comment,” said Moish. “I am interested solely in building Twetch at the moment.”

It’s a solid plan. If it succeeds, Twetch could demonstrate the potential of the BSV network to regular people, who haven’t yet got much to go on. (Currently, BSV’s most used app aggregates weather data.) Still, to take flight,  Twetch needs users. An ahrefs analysis suggests the site only gets around 62 organic Google searches a month, which isn’t many.

But its small, like-minded community is highly engaged, and awaiting the second coming, as rapt as a cargo cult.

“I think that since Twetch is a BSV project, obviously BSV users are the low-hanging fruit for Twetch to pursue as early adopters,” said Kurt Wuckert Jr, an entrepreneur adrift in the BSV space, and an enthusiastic Twetcher. (He was the author of the “protocol war” op-ed).

Yet Wuckert insists that Twetch is more than a mere echo chamber, and that “there are even a surprising number of people from outside the general cryptosphere that have joined simply to do some reconnaissance—but who are from the non-crypto social media industry.”

Mike in Space is one of these, as is Joshua Davis, alias “Karbonbased,” a former provocative tweeter who was ousted from that platform after an imbroglio involving a DCMA takedown. Although Twetch isn’t censorship-resistant, and Davis is certainly no BSV fluffer, he nevertheless sees value in the experiment.

“The biggest hurdle they have to tackle is attracting and maintaining more active users,” Davis said. “At times it feels slow on the platform as far as engagement but I’ve always said that Twitter’s only moat is it’s users.”

Similarly, Ryan X. Charles, who runs Money Button, the BSV-powered online payments app that handles Twetch transactions, says that many people turn up simply to escape the awfulness of Twitter.

“Crypto Twitter is a shit hole,” he said. “I recommend everyone quit using it. It makes you dumber.”

“Twetch,” he added, “is a place to communicate unmolested. The fact that the cryptocurrency industry relies so deeply on Twitter is an indictment of the fact that it is mostly a scam industry—scammers and criminals are great at populism. Twitter encourages this. Twitter is a part of the problem.” 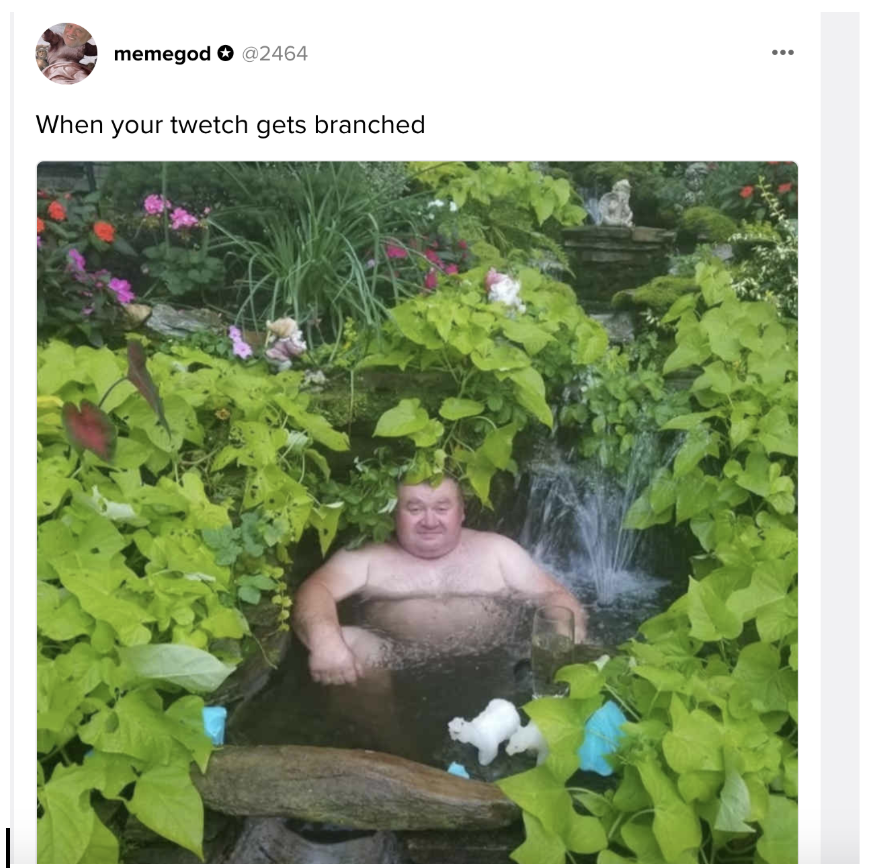 On Twetch, trolling doesn’t pay—it costs. “Twetch forces you to be more thoughtful with each reply as it literally costs you money,” said Mike in Space. “That friction, even though small, does have an impact and I think raises the level of discourse. If you want to troll someone, for instance, you need to pay them for the privilege.”

But Twetch’s founder, Moish, believes that Twetch’s appeal lies in what it offers in the way of achieving immortality.

It comes down to Twetch’s central feature, the immutability of users’ posts. “Twetch is an oasis because people think twice about what they post—because their words will live on chain,” said Moish. And this seems to cause the community to spend a lot of time thinking about the future and the Great Hereafter…

Twetch users, indeed, post a lot of stuff about eternal life on the platform, more than you’d expect on a social network. “Twetch is the on-ramp for consciousness immortalized,” writes one user. “An unalterable ledger on which we can securely upload consciousness,” wrote Moish himself, in a recent-ish post.

“The blockchain will ultimately store all data that has value—your Twetch profile will be a way to remember you after you’re gone.”

He’s not kidding with the sci-fi stuff. BSV supporters want everything you do, say and feel to be uploaded to the blockchain, logged and filed like numbers in a bookkeeper’s ledger. This philosophy, deeply at odds with the mainstream Bitcoiners’ pro-privacy ethos, is also the philosophy behind Wright’s ambitious “Metanet,” announced early last year, which proposes to uproot the internet and rebuild it from scratch on BSV. Twetch, in the grand scheme of things, would be the first, tentative step toward that lofty goal.

“The idea is that everything you do, both online and in real life, will be a transaction on the blockchain,” explained Moish. “When everything you do is accounted for you are incentivized to act in a way that is honest and good for the network as a whole.”

The payments aspect plays into this, too. “Basically it becomes an economic incentive to act in a way that benefits the network (in this case the entire world),” he said, likening the possibilities afforded by Twetch to the realities presented in recent sci-fi fantasy such as Ready Player One, and Altered Carbon, a show where “consciousness can be transferred to different bodies,” according to Moish. “Things like walking an old lady across a busy street will be rewarded financially, so people will be more likely to act in that manner.”

There’s almost a surveillance capitalist flavor to all of this, albeit tempered by software engineer optimism. It’s a Panopticon for the digital age, built by and for those who would typically advocate for privacy. A life immutably surveilled, the BSV supporters say, is a life well lived. And now you know where to find them.

Bloomberg suggests that Bitcoin should be $15,000 according to this adoption metric

SBTC Plummets by 99% as Devs Announce Dissolution of Token

MicroStrategy CEO could ‘liquidate $200M in Bitcoin on Saturday’

More Than 430 Altcoins Are Now Derived From Bitcoin

Motorola to foray into ‘Smart Home Appliances’ in India with Flipkart

«Picked on Bitcoin, But Meant Investors»